‘I awoke in the night with a fever

And the sky was the darkest blue

A still small voice was calling me’

‘We Have a Dream’, with the voice of John Gordon Sinclair, 1982 Scottish World Cup song (a gift to me from TAap)

TAap listen to the ‘still small voice’ and obey. In December 2012 they made their home in the east of Glasgow and worked flat out. Performers in the Necropolis by night, scavengers of charity shops by day, TAap became frequenters of the Barras, wearers of lampshades as hats and purveyors of discarded wedding dresses. The material they brought back to their studio was gulped in and spat out at a furious pace as TAap language adorned strict cenotaphs and embraced old ladies two-stepping across the pages of a Glasgow ballroom. Their feverish ectoplasms of creativity splurged over all surfaces. Their ink-cantations filled the head space and hair space of their fellow studio dwellers. In their final act, the wider group they had shared this time with was drawn together in an immense gaffa tape mural, and portrayed as ‘The Last Buffaye’. It was a mammoth offering in and to the Mackintosh Museum that all had lived in. Then they TAaped three times and were spirited away into the darkest blue yonder, taking their labours with them but leaving their calling card of a useless bag of single net curtains and other spent detritus.

And the voice kept getting louder

And louder and louder crying’

The three TAaps heard during their last Glasgow performance proved significant. In July 2013 they returned to the East of the city with a third member, a Priest, his ability to TAap out new meanings from other realms completing this furious synaptic triangle. Stranger flights of TAap logic now swooped and crowded the air.

During December’s frenetic foraging, TAap had discovered an unquenchable painting oasis of Glasgow cityscapes in amongst the furniture, bric-a-brac and well thumbed books of a central charity shop. Humbly priced, these paintings were flying out to all domestic corners of the city, yet their shop numbers magically never diminished, pouring out from a seemingly in-exhaustive source. TAap had heard the ‘still small voice’ through the black felt tip pen of (another Mackintosh), Finlay Mackintosh, the origin, scratching his co-ordinates carefully onto the reverse hardboard of each of his labours. Over the subsequent months, in TAap’s distant mirror of Cornwall, the voice kept getting louder and louder.

Others may have just stopped at acquiring the object of the painting, but for TAap there is always a direct route to be taken to a further experience. TAap followed the voice and contacted Finlay Mackintosh. In July they found the walls of his Springburn flat feverish with paintings. An incantation of place names rise up from the work. Elmvale Street, Springburn Park- a liturgy of locations. TAap invited Mackintosh in his own front room to look at his work from another dimension, through the rolled up telescope of his own drawing. Council flower beds become floating islands in green seas. Earthbound cars are the flying vehicles of the future.

They then met up the next day to break bread and draw with Finlay Mackintosh and his friends outside Blackfriars pub, as punters strolled around the Merchant City Festival. TAap invited Finlay Mackintosh to their side. They await his answer.

The TAap heart is a collective heart. The TAap mind is a collective mind. TAap teems with the swirls and eddies of darkness and joy. TAap will heal you as you heal them (TAap’s motto). 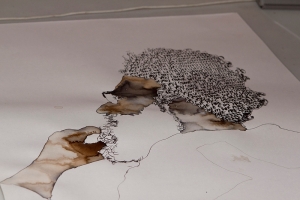 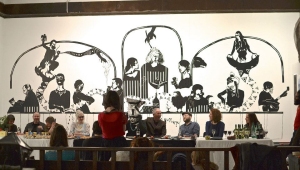 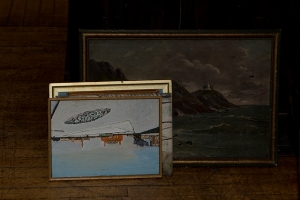 One thought on “TAap in Glasgow”