“The stone was dipped in some water, where, in defiance of nature, it floated miraculously on the surface like an apple or a nut, for that which the saint had blessed could not be made to sink.” 1

Through listening to the artists’ presentations and talks on Raasay, there have been a number of links to stones and sorrow.

Ceara Conway, the artist commissioned to make work for the Derry~Londonderry knot on the Spiral, has been part of our group and gave a talk on Tuesday night on her practice and this particular project. As part of her research she visited the Stone of Sorrows at Gartan, St Columba’s birthplace in Co. Donegal. This was the stone it is said St Columba laid down and slept on, during his last night on Ireland before he was exiled. He was so full of loneliness and sorrow, but as he lay on the stone, the stone took these feelings away from him. Ceara went on to say that the stone became a site of ritual, for those leaving Ireland through the ages, in exile or emigration, to spend their last night in Ireland there. This longing and sorrow became part of her performance and sung lament, ‘Vicissitudes’, which took place in a boat on the River Foyle.

Kathryn Maude from King’s College London gave her talk last night to the group on her area of research, looking at the texts both on and by women in the Medieval period. With so few texts remaining- approximately 5 letters and 2 poems over a 500 year period- she read a section from ‘The Wife’s Lament’ in Old English, which is written in a woman’s voice. “I sing this poem full of grief, full of sorrow about my life”. 2 Kathryn went on to say as well as the distance in time she feels from these women there is also an ’emotional gap’.

Jessica Ramm sang the Gaelic song “The Cave of Gold” as part of her presentation, where a playing piper ventures deeper and deeper into a cave, in search of gold he has heard lies at the base of it. Those outside can hear the spiral of sound moving away from them, getting fainter and fainter, until the sound of the pipes at the end is transformed into unbearable discord, as the piper has met his end with the ‘Green She-Bitch’.

Over the course of this residency, the scholars and artists have offered several texts and song from different languages and times, including Latin, Gaelic, Irish Gaelic and Old English. Performing these to the group, it brings forward Professor Clare Lees’ notion of performative time: “See! Look! We’re here!” Rather than time being linear, in this moment the link to emotion and voice brings the past breaking through the surface of the present. 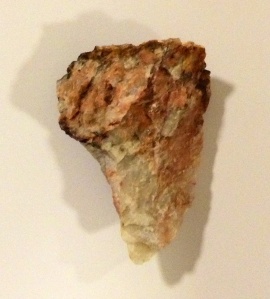