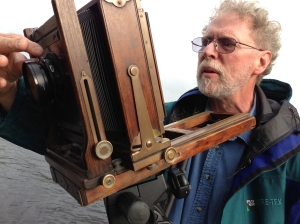 He worked on two photographic bodies of work. For the first, he travelled to photograph the birthplaces of Saint Patrick, St Brendan and St Columba. His description of Lough Gartan, St Columba’s birthplace, echoes the mention of trees in Sorley MacLean’s poem ‘Hallaig’. MacLean imagines the cleared village’s absent women as, “ … a wood of birch trees / Standing tall, with their heads bowed.” Cooper speaks of, “Three silver birches, leaning towards the Lough, a trinity picture”.

For his second series, he went to the very edges of land, visiting the cardinal points of Northern Ireland including Benbane Head, County Antrim, the north-west point and then onto the east-most point at Burr Point on the Ards Peninsula.  In particular, with the latter location, he focused on the view from Ireland across the water to Scotland, aiming to echo St Columba’s last view from Ireland, before his exile to Scotland.

A quote from a book brought in during our residency by local Raasay resident Jenifer Burnet, describes who St Columba was in terms of the cardinal points.

‘In the West he [St Columba] was called upon as a bard, a guardian of the magical powers inherent in the literary traditions of the Celtic languages; in the North, he was a prince, a member of a prestigious lineage with a responsibility for the defence of his people; in the East he was a father, an abbot who was a just and tender provider of the many monks under his care and in the South he was a priest who dealt directly with the forces of the Otherworld.’ 1

In an interview after he had returned firstly from Raasay, Cooper explained his relation to the land and how it impacts on his photographic process. In particular, the group’s question on Peregrinatio had a real resonance for Cooper in describing his creative practice, which involves going out to the edges of the world. He described peregrinatio as, “The compulsion to send yourself out on potentially an unending, undestined voyage”. He went on to say, “As soon as I heard it [peregrinatio], it’s one of those words. It creates through syllabic movement a motion, and I have been set in that motion always, since as a boy. I find my way but I never know where the way is”.

Cooper also described the title of our project ‘Convocation’ as having meaning for him in terms of how he works with the land, as he only takes one negative at each site. “Can there be a convocation with the site? In enough silence, things will speak. If there is enough respect and the site is willing to participate, then that for me is a conversation.”

Thomas Joshua Cooper would like to express his deep thanks to Kate Mooney, Laura Indigo Cooper (who travelled with him to Northern Ireland) and David Bellingham, “for their insights, practical help and kindnesses in helping me take this project to conclusion. “ 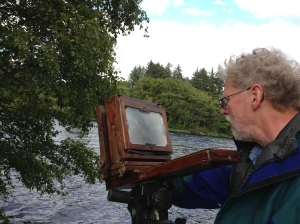