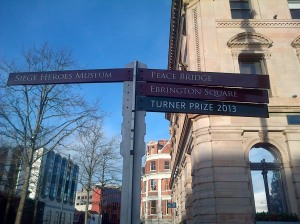 ‘Colm Cille’s Spiral’ is a project taking place across the UK and EIRE, examining the legacy of 6th Century Saint Colm Cille, from a contemporary creative perspective.  I have been the curatorial lead for the Scottish ‘knot’ called ‘Convocation’, working with CCA (Glasgow), University of Glasgow and ATLAS Arts. ‘Colm Cille’s Spiral’ is a Difference Exchange and Centre for Late Antique and Medieval Studies, King’s College London project that is part of Derry~Londonderry City of Culture 2013.

Here is my blog post for ‘The Fold’, a ‘creative convention’ which brought all 6 projects together in Derry as part of : http://www.colmcillespiral.net/the-fold-a-creative-convention-after-colm-cille-colm-cilles-spiral-30-nov-1-dec-2013-derry-londonderry/ and took place at Verbal Arts Centre, Derry.

[Colm Cille, the founding father of Derry, is attributed in a poem as describing the city as follows:

“The reason I love Derry /Is its quietness, its purity/ For full of angels white it is/ From one end to the other”.

We arrive in the city for our concluding event, ‘The Fold’, at a time when it could be described as busier than Colm Cille envisaged it in his mind’s eye, with impressive queues for the Turner Prize, nightly gatherings in squares to see the Lumiere Festival projections and generally a city and audience confidently in full swing for all the cultural offerings ofDerry~Londonderry City of Culture 2013. ….]

For further information on the wider project please see http://www.colmcillespiral.net/   and http://creativefutureshq.com/projects/colm-cilles-convocation/ for my blog posts on ‘Convocation’.