Many megaliths were destroyed or defaced by the early Christians. 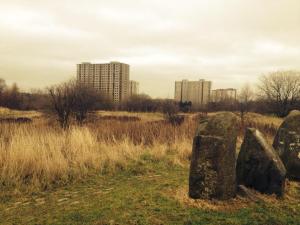 The Monkland Canal, to the north of the Sighthill Standing Stones, was constructed in sections between 1794 to 1797 in order to bring coal from Monkland to Glasgow. In 1952 the canal was closed to navigation. Due to the construction of the M8 motorway, sections of the canal were infilled.

St Rollox Chemical Works, for the production of bleaching liquor and powder for the textile industry existed here from 1797 to 1964.

The Sighthill Housing Scheme was built by Glasgow City Corporation from 1964 to 1969.

The M8 motorway, which runs alongside the site and bisects the city, was built between 1968 and 1972 under Glasgow City Corporation.

The Callaghan government created the Job Creation Scheme in 1978.

The Thatcher government abolished the Job Creation Scheme in 1979.

Through the Job Creation Scheme, Glasgow Parks’ Astronomy Scheme built the Sighthill Stone Circle in 1979. The project was designed and led by Duncan Lunan.

The stones were from Auchinstarry Quarry, Kilsyth. The quarry closed in the 1980s’ and is now used for fishing and climbing activities. The stones were brought to the site by a Royal Navy helicopter.

The Sighthill Stones are placed at points of sunset and sunset at the Equinox. This system follows later beliefs relating to why megaliths were originally built.

The demolition of five of the Sighthill high rises took place 2008-2009.

This site is currently marked for regeneration, linked to a Youth Games in Glasgow bid for 2018. Plans are to relocate the stones and demolish the remaining monoliths that surround them, to make way for an athletes village and park. This bid is by Glasgow City Council, The Scottish Government and the British Olympic Association. 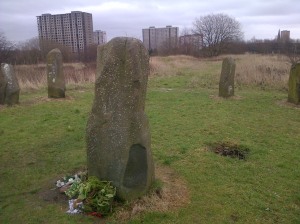