I gladly strained my eyes to follow you was devised by Shauna McMullan. It took the form of a 45min guided tour of National Trust for Scotland’s Pollok House, focusing on a selection of female portraits from the House’s art collection. [1] It was part of a group residency and exhibition, Cabinet Interventions (2018).

McMullan invited a number of writers, artists, academics and Pollok House staff to consider a particular portrait she had selected for each person. McMullan sent no details of the work, allowing for each respondent to consider how they would approach their task. The content of the tour, delivered by the Pollok House tour guides, was made up from short texts written specially for each work. The full piece I submitted, can be read here. 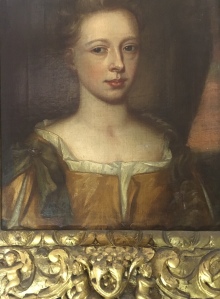 The painting that McMullan invited me to consider was ‘Mrs Salisbury’ (1724) by Michael Dahl (1656/9-1743). Her name gave enough for an internet search. The first image I find is of a mezzotint. It is a half length portrait in an oval, with the inscription under it reading ‘Mrs Sally Salisbury’. The curator notes in the British Museum catalogue entry, that ‘… both the engraver and the original artist suppressed their names from the print due to the character of the personage.’ [2]

I first visit this painting at Glasgow Museum Resource Centre in Feb 2018. The work had been temporarily re-located to this store whilst building work was taking place in several of the rooms at Pollok House. I don’t want to miss any detail in this first meeting with her. Accompanied by the two museum curators who facilitate this visit, they stand aside whilst I look at the painting. I then examine the slim folder that accompanies it. There are no biographical details; the index only includes a curator entry on the condition of the painting. The gold relief frame, complete with heart and cherubs, seems at odds with the considered portrait within. The museum curators ask me if I wish for the painting to be turned over. The back is marked with a hand-painted inscription: ‘Mrs Salisbury or Priddon. Dahl Pinxt’.

Dahl paints this portrait of Mrs Sally Salisbury, in 1724, the year that she dies. She is thirty-two, whilst he is sixty-five. He lives to be eighty-four. In her short life, she has sold lace and oranges as a child; as a young runaway been forced into prostitution; then tried for stabbing a lover, whose misdemeanour had been to give two theatre tickets to her sister rather than to her. She subsequently dies of ill health in Newgate jail. In the year before her death, her story and likenesses are heavily circulated as she has become notorious. There are two separate volumes of her life created during the year of her trail, with further mezzotints from the accompanying illustrations sold. The two books are ‘Authentic Memoirs of the Life, Intrigues and Adventures of the Celebrated Sally Salisbury’, 1723, by Capt. Charles Walker and ‘The Genuine History of Mrs Sarah Prydden, Usually Called, Sally Salisbury, and Her Gallants. Regularly Containing, the real Story of her Life’, printed for Andrew Moor, 1723.

Michael Dahl, a Swedish painter, was highly regarded in his field, regularly gaining major commissions from the ruling classes, as James Mulraine notes, in the period 1690s-1710s:

…regiments of [his] sitters line the walls of Royal and country house collections of the period. All this changed in 1714, when Queen Anne was succeeded by King George I.

Who commissioned Dahl to paint Sally Salisbury or did he choose to do so himself? Did she sit for him or like the ‘genuine’ and ‘authentic’ memoirs purporting to know her, is his portrait of her a real likeness or fabrication? As he moves from court sitter to ‘courtesan’ as subject, is he aligning his fading trajectory with that of her rising one in a bid to rekindle his own publicity? Or is he merely freed in 1714 from court patronage and able to draw on a wider repertoire?

It can only be noted that Dahl’s portrait of Salisbury is sympathetic in nature. She does not appear out of place in Pollock House in the company she keeps with royal and privileged women.

The subsequent piece that I submit for the Pollok House tour, mirrors the brevity of her life by selecting the succinct, at most six word commentaries that describe each stage of her life, taken from the margins of the memoirs that circulated about her. The piece begins and concludes with two longer quotes that capture her trajectory:

‘Many are the reports spread abroad, celebrating that Piece of Contradiction, SALLY SALISBURY’. [6]

[4] p.3, ‘Authentic Memoirs of the Life, Intrigues and Adventures of the Celebrated Sally Salisbury’, 1723, by Capt. Charles Walker.

[5] Comments from the side margins, ‘The Genuine History of Mrs Sarah Prydden, Usually Called, Sally Salisbury, and Her Gallants. Regularly Containing, the real Story of her Life’, printed for Andrew Moor, 1723. Reproduction from British Library, Gale ECCO Print Editions.

‘I gladly strained my eyes to follow you’ publication. A guided tour of Pollok House, Shauna McMullan (2018) 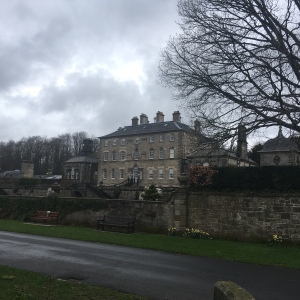