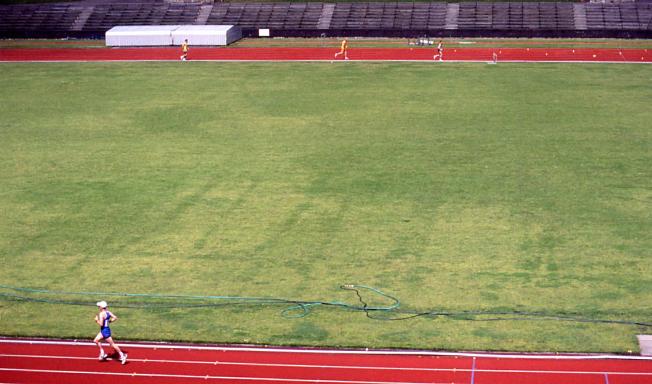 Initially I wanted to speak to William as there was a paradox between the sport he competed in and where he lived – the Orkney island of Sanday which measures 21 km length wise and between 1 and 9 km width wise. For this reason alone he was the ideal person to discuss the meaning of limits with. Moreover I wanted to investigate the implications of running to infinity. As the interview progressed, I understood William had the capacity to ‘handle distance’ because he consistently translated the unknown into facts and figures. By using this method the vague expanse of infinity can be pinned down; concentrated into human scale.

This interview took place in the lounge of a Kirkwall B&B, 24 February 1999.

JB: I was looking at the dictionary definition for ultra and it states that ‘it is an attempt to pass beyond the limits of the known’. I wanted to speak to you about your ultra marathon running. In this sport you are definitely passing beyond these limits. You are almost running to infinity. First of all, could we talk a bit about the distances that are involved? I know there are 100 km races and 24 hour runs.

WS: You are right, ultra does mean beyond the limits. In athletic terms, any distance… well let’s put it this way: A marathon is a set distance, its 26.2 miles, 42.1km. An ultra marathon or ultra-distance race is a race beyond that distance, but obviously in order to organise this sport on a world-wide basis there are two distances that have been accepted as more or less standard distances. One of them is 100km which is 62.2 miles. Then the other one is the 24 hours race which is as far as you can run in 24 hours.

JB: A bit of and obvious question but can a runner become lost on a long distance route?

WS: Well normally the runners don’t have to navigate. We don’t have Global Positioning Devices or anything like that as the terrain we pass over isn’t terribly wild in that sense. There are markers and marshals out on the course too. The only one I can think of is the West Highland Way competition- 93 miles that takes about 20 hours. There you have to be careful. You can go off route. They try to have markers but in this case you do have to navigate.

JB: I had imagined that the routes of these races would be like starting at one point and then just running out completely as far as you can go…

WS: In reality the 100 km races are either point to point or quite often like laps around towns. Courses vary according to what country hosts them. 24 hour races are always held on loops – either on an ordinary running track or…

WS: That was a road loop, 10 miles around a town. They count the laps then measure when you stop, because obviously, especially with 24 hour running it is very important that a careful check is kept on the distances because otherwise all sorts of disputes can occur. Someone says they have run a silly amount and no-one has counted the laps properly. It’s highly regulated so that performances are compared properly. So that’s how it is organised.

JB: When did you make the choice to compete at such a distance? Were you doing marathon running or distance running?

WS: I’ve had a very sporty life. I was heavily into table tennis in the ‘70s and when I retired from that in 1981 that’s just when the marathon boom was starting. I’d always done abit of running for personal fitness and was quite keen to have a go at the marathon running. I just went ahead and did a marathon with not much training and did a very fast time just straight off. I did 2 hrs 43 which is you know, quite a reasonable time. In 1982 we moved to Sanday… I wasn’t involved in any formal competitive athletics or running until 1992 when I got back into half marathons and marathons. It was someone at the shop where I got all of my running supplies by mail order who suggested the ultra marathon. He was asking about my training and about racing and did I recover quickly and I said yes, that I had raced 3 in 1993 and recovered well. He then asked me how far did I run on my training on the island and I said that quite often on a Sunday I would run about 20-25 miles, I enjoyed it. And he said, ‘Oh! Have you ever thought of ultra-marathon running?’ And I said, ‘No’ [laughs]. He said, ‘Well, it sounds like you might be quite good at it because you handle distances.’ He went on to explain all about the international set up – the Scottish championships, the British teams. To cut a long story short I came second on the TT course where the motor cycle race is on the Isle of Man and as soon as I crossed the line I thought, ‘I’m an ultra marathon runner!’

JB: How do you see the landscape because I was reading in ‘The Ultimate Encyclopedia of Extreme Sports’ that extreme athletes would see landscape differently from someone else. The example they gave was a mountaineer. If a mountaineer happens to be passing by mountains they will see them but at the same time be working out routes across them.

WS: With me it’s assessing what clothing I would wear that day. I have a wide range of outdoor clothing so I can train in quite bad weather.

JB: If you were a tourist though?

WS: As you say, where can I run today! When you go places you think it would be great to run up that landscape feature. You do look at it wondering how you can enjoy and get out into it.

JB: Because of the great distance you cover in these race routes, what do you find yourself thinking about?

WS: What I find is although some courses, I suppose the 100km courses like the one in Japan, were spectacularly scenic, in reality I find when you are running, you just do not see it. I might as well be running around that table top [points at B&B table] to be honest because in ultra running, I find the psychological side of it is of overwhelming importance. Obviously you’ve got to have the fitness, you’ve got to have done the training but after that, the mental side is enormous. What I find is I focus on various things. At the moment I’ve started working with a sports psychologist from the University of Sunderland and they teach you to focus on key words. You never say things like ‘I’m feeling bad now’. You would say, ‘I’ll be feeling stronger soon’, so it is all down to positive thinking. Focus on a positive word and use it like a mantra. And then you use things like visual imagery where… say for example, if you’re just running around a track for a long time you might think ‘I want to be running strongly’, so you start to visualise yourself running really strongly or you might liken yourself to an animal running. So this is all going on inside your head but in the meantime you are maintaining rhythm and relaxation. Obviously this is an enormous area for development. In a way your mind is the limiting factor after a certain point.

JB: People might find it strange that you live within the limits of a small island but then run these huge distances all over the world.

WS: Sanday’s not a bad island. There are several loops I can run. Some of the other smaller islands would be hopeless but here I have several loops – a 3 mile loop, a 6 mile loop, a 10 mile loop. So you can do a combination of laps. I think the other thing is that in Orkney, as you know, there is such a feeling of space. Because of the wide horizons you can see 25 miles each way…

JB: Yes, you live right near the edge as well.